No one can deny that conservatives and progressives find each other's perspectives troubling and perplexing, and that good people on both sides are committed to doing all they can to advance their ideological and political agenda.  This post is not intended to oppose political activism, which is a good and protected American tradition.
However, in the midst of our peaceful activism, we do not want to lose unnecessary ground in our mutual respect and kindness and understanding.
If you are after a United States of America and after a world that is kind and wise and secure, I invite you to commit yourself to these disciplines:
1) Maintain several daily friendships (with real face-to-face interaction several times a month or more) that are with people who have a political perspective that you personally oppose.  Engage with them in the things you hold in common, and do not let your engagement be focused on changing their political perspective.
2) Deliberately allocate a portion of the time and attention you spend on news and information to perspectives that trouble you.
If you spend hours watching FOXNEWS or MSNBC, record and watch an hour of coverage from the other channel, even if it makes you angry.  Add in a third perspective, too, by watching an hour of a more neutral news program or by reading down the stories on news.google.com each day.
If you read the Wall Street Journal each morning, spend time skimming the stories on a less conservative or truly progressive paper like the New York Times, and vice versa.  And again, add a more moderate mix like CBS news.
3) Practice empathy with those on "the other side", and understand that you would have their perspective and make their choices if you were in their situation and had been formed by the forces that formed them.
That is not to say that you should not fight for the things you passionately defend and promote.  It is to say you should do it without violence or hatred, but with respect for even people that you rightly see as the enemy.
So:
1) Maintain several warm face-to-face friendships that are with people who have a political perspective that you personally oppose.
2) Deliberately allocate a portion of the daily time and attention that you spend on news and information to perspectives that trouble you, to be informed fully.
3) Practice respect and empathy for those “on the other side”  without sacrificing your own beliefs.
For support and accountability in promoting and practicing these commitments, join me here:
https://www.facebook.com/groups/1262618443804657/ 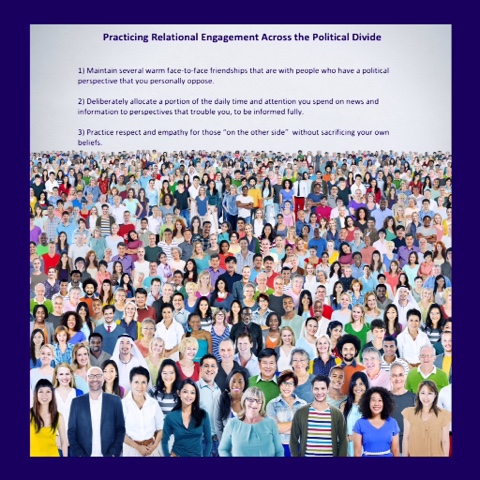 My legal name is EmKay MariaKaren Kettleson-Anderson, but “EmKay Anderson” works just fine. I am a disciple of Jesus (see my post on 8/18/2006 for an explanation of what I really mean by that) and all of the posts through 12/2009 were written while I was a member of St. Andrews Presbyterian Church (PCUSA) in Newport Beach, CA. I transferred my membership in January of 2010 to St. Mark Presbyterian, Newport Beach. St Mark was full of wonderful people and very good theology and practice, and if our lives had not changed in dramatic ways from 2011 to now, I would have rooted there. We are “temporarily” in Northern Minnesota, and look forward to whatever is ahead of us. I am in my 50s, and am a wife, mother to 4 adult sons, step-mother to 2 adult sons, and grandmother to 3. Although -- like you -- I keep busy with many commitments and responsibilities, my life is centered around following after God through Jesus Christ and letting Him transform me through my relationship with Him and my relationships within my community of faith.

No More No Less Lyrics